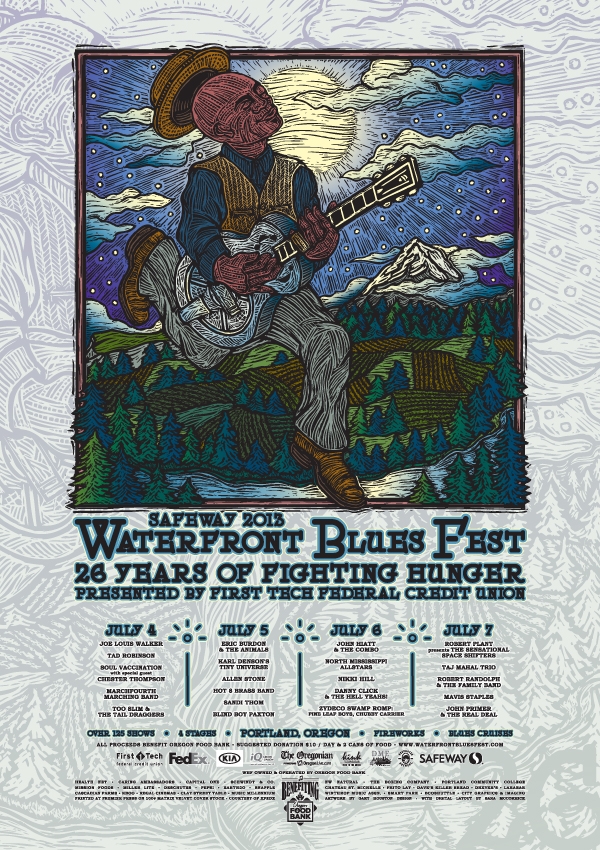 PDX Rocks – or rather Portland sings the Blues! July 4, 5, 6 & 7, Portland’s own Waterfront Blues Festival is recognized as the nations greatest blues festival. In 2011 London based, Essentials Travel Magazine, listed the Waterfront Blues Festival in the top 10 outdoor festivals in the US. Outside Magazine also listed the festival in the top 10. Winner of Keeping the Blues Alive award from the International Blues Foundation. Voted by Oregon Festival & Event Assoc. best Oregon festival. Hot off the press is the 2013 Blues Festival Poster. Introduce artist, Gary Houston, Voodoo Catbox. Another Portland treasure. Gary has been hand-pulling multi-color silkscreen poster works of art since 1995 and creating Waterfront Blues Festival posters since 2001, some of them collectors items such as the 2008 “Ain’t No Peace in the Barnyard” and Robert Johnson Waterfront Blues Festival Posters 2001-2004. voodoocatbox.com. Printed by Premier Press on Komori Lithtrone 8-color press with a watermark of Oregon Food Bank in Diamondkote UV coating. As Brownie McGhee said so well, “The Blues is life.” And Keith Richards, “If you don’t know the blues… there’s no point in picking up the guitar and playing rock and roll or any other form of popular music.”

Boogie to the blues, or romp with the blue devils to an expansive musical lineup including the amazing, Robert Plant–presents the sensational Space Shifters (Justin Adams, John Baggott, Juldeh Camera, Billy fuller, Liam “Skin” Tyson, Dave Smith) Robert Plant is the Winner of the Grammy Lifetime Achievement Award and picked “best lead singer of all time” by Rolling Stone readers. “Though his contribution to Pop Culture began with his work with Led Zeppelin, his path since has been uncompromising: keep it fresh, spin the bottle, dig deep, embrace the past – visit it – celebrate it – but don’t build a home in it.” waterfrontbluesfest.com

Since 1988 the festival has raised more than $7 million dollars to benefit the Oregon Food Bank. The artists, musicians and beautiful waterfront venue is just one more reason why Portland is the best city in the USA.

Listen to the music:
http://www.waterfrontbluesfest.com/wbf/layouts/wbf/sublayouts/flmplayer.htm